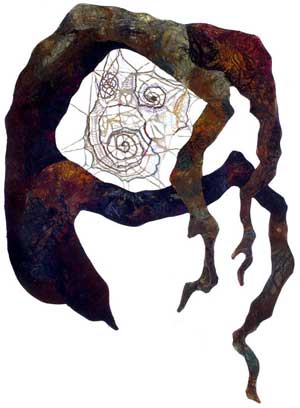 In 1999 a small group of women gathered together with a vision of a "new" type of quilt exhibit. At that time topics such as spirituality and inspiration were not always understood or welcomed at traditional quilt shows, and all-medium liturgical art exhibits generally featured few if any quilts. There was no "safe" or welcoming venue for quilters who saw their works as a connection to the sacred and/or as an expression of their own spiritual journey. Often the meaning behind these works was missed or misunderstood because the artist did not have the opportunity to share their sources of inspiration with the viewer.

Founder Vikki Pignatelli and the other committee members wanted to create a dignified exhibit of artwork that would touch all those who viewed it on both spiritual and personal levels. We wanted to share the experiences of quilters whose stories would be a source of healing and strength for others by allowing the artist to submit a statement which would be exhibited with the artwork that described the meaning or inspiration for the piece.

In a hectic era when people are searching for meaning and spirituality in their busy lives, we felt this concept would be accepted and welcomed. Our hopes have been fully realized and each of the Sacred Threads Exhibits (in 2001, 2003, 2005, 2007, 2009, 2011, 2013, 2015, 2017, 2019 and 2022) has been well received. The show does not emphasize any particular religion or theology but conveys the spirituality, healing and inspirational messages that transcend all people.

For the exhibit, quilts are divided into categories based on theme. These are Expressions of Joy, Spirituality, Inspiration, Grief, Healing and Peace/Brotherhood.  The artwork themes provide thought-provoking insights, encouragement, inspiration and healing responses to grief and human hardships. It has attracted a wide array of visitors and has proved appropriate for all ages from young teens to seniors. The exhibit is a positive influence on the human spirit, giving joy as well as addressing concerns of the soul and mind.

Following the 2009 show, founders Vikki Pignatelli and Wendy Bynner handed the reins over to Lisa Ellis and friends. The 2011 and subsequent five shows have been held in the Washington DC area.

The Virginia organization committee would like to hand over the baton to a new leadership team. To learn more, check out The About Our Future page and fill out a form if interested.

Enjoy our documentary featuring interviews with our founder Vikki Pignatelli, committee members and many artists.

Vikki Pignatelli
discusses her 2011 piece "Against All Odds"

Lisa Ellis
describes the difference between Jurying and Judging