Below is just a small sampling of the wonderful quilts included in Sacred Threads 2007. The photos and artist statements are provided courtesy of the artists. Artists maintain the copyright to the images and text. 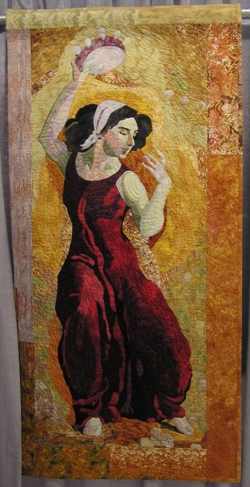 After the safe crossing of the Red Sea, Miriam, sister of Moses, takes timbrel in hand and leads the Israelite women in a dance of happiness and gratitude to God.

Adapted from the Book of Exodus. 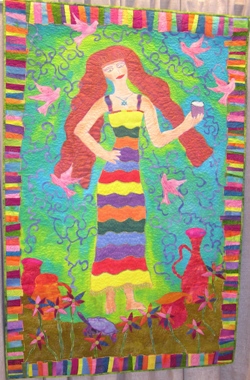 Her Cup Runneth Over

My goal in all of my art quilting is to depict images of women who are deeply rooted to their environment and intensely connected to the people in their lives: past, present, imagined and in the future.  This radiant woman's cup is metaphorically filled to the brim and overflows with love, loss, birth, fear, sunshine, moons, stars, tears, laughter, learning, life, and death.  She drinks it all and tastes each precious moment as she lifts her glass and toasts to the blessing that is her life! 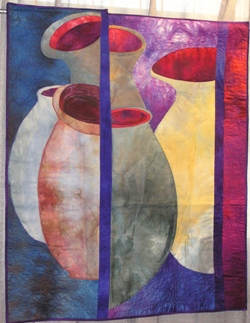 A study of the miracles of Jesus prompted the series 'Hope Then and Now'.  At the heart of our Christian faith lies the profound yet simple truth that the same power that has turned water into wine can breath new life into you and me.  In the gospel accounts of his ministry we discover his never failing mastery over the forces of sickness, sin, nature and Satan, life and death.  The 35 recorded miracles of Jesus continue to carry a faith-strengthening message to all who call upon the Name of the Lord.  Come, look and embrace hope. 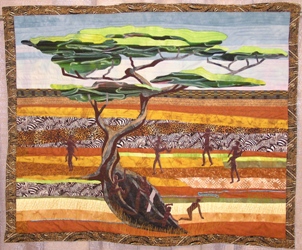 Birth of the People

The Kung San People of the Kalahari Desert-like peoples everywhere- have creation myth. According to the San, there once was a bottomless hole in the Earth out of which a great tree grew. Using the tree's roots, first the animals, and then the People themselves, climbed out of the hole to populate the land.

I only read this legend after my first time in the Kalahari-but it brought back memories in a rush. For I had been to a place in the middle of the Desert where limestone hills are riddled with caves and sinkholes- some of them seemingly without bottom. Out of the depths of one particular hole, a great tree grew.

Even after thirty years, when I returned to the Kalahari, I felt the magic and mystery surrounding this desert land. Science tells us that humanity arose in Africa- and the hole in the Earth, with a tree growing out of the rocks still exists. It is our stories as well as our genes that unite people throughout the world in common humanity. 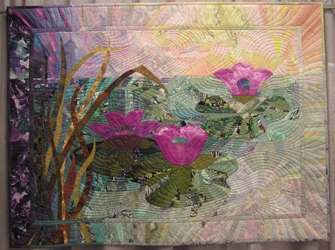 I enjoy making quilts that run the gamut from tongue in cheek; humorous; tedious broderie perse masterpieces; instant gratification fusible web wallhangings; to scripture based quilts. But I believe my gift- that of taking the picture inside of me, and turning it out into a fabric piece that others can identify with is truly from God.

What a joy and a privilege to thank God for this gift. 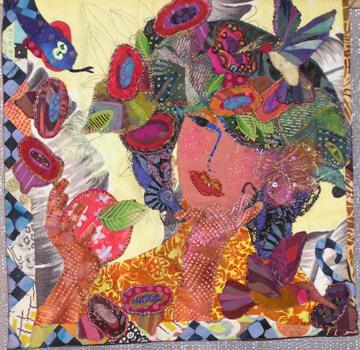 Bedazzled is a quilt created during a study of women of the Bible. I began to think about Eve, a vivid character for women. I often use sketches along with written entries in my personal journal. How would I depict her? Adorned with all the imagined beauty of paradise, self absorbed and heady with her influence over Adam, the serpent tempter had only eyes for Eve.

I do not dismiss lightly our responsibilities to seek and serve God in my light-hearted depiction of the cross-eyed serpent concealed in the quilt border. I believe the serpent's capacity for understanding human greed and power is supreme as he tempts Eve into disobedience, but he thoroughly underestimates the just love and mercy of God. All are tempted and lose perspective. God did not let Eve and Adam wander out of the garden alone, but clothed them with His own hands. Even in banishment, the Lord voiced a note of hope and promise through forgiveness, redemption and grace. The gate to the garden is not longer closed, alleluia. 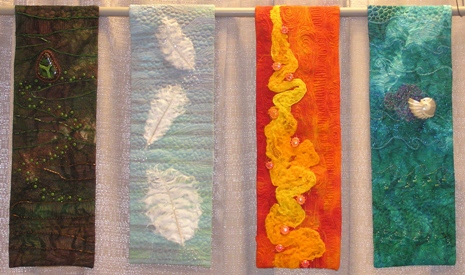 A great deal of the inspiration for my work comes from the world around me.  As artists, we learn the formal elements of design ( line, form, color, texture, etc.)  The Great Designer, however, had four basic elements, Earth, Air, Fire, Water, from which worlds and galaxies were formed.

This is a truly humbling thought in the face of our rush to consume all of the newest materials, gadgets, and technologies this world has to offer.  Perhaps, instead, we should respect the Designer's Elements enough to protect them from ourselves. 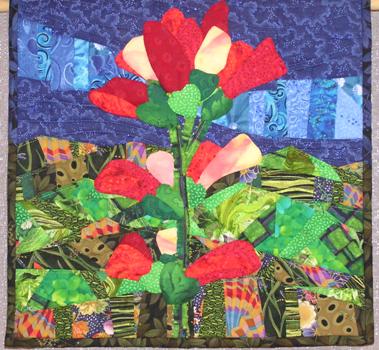 I used to think of grace as the big, undeserved gift that arrives only once or twice in a lifetime: the sensations that one feels after witnessing a car narrowly miss a small child. Now, I view grace as the small, undeserved gifts that all individuals receive daily, the illuminated Indian paintbrush flower against the hills. Observing daily grace takes work. It takes living and breathing each moment of every day.

Welcome to an oasis of calm in a noisy world. Celebrate the sense of hearing, especially the subtle sounds often lost in the clamor of life. Take a moment every day to be still and listen. 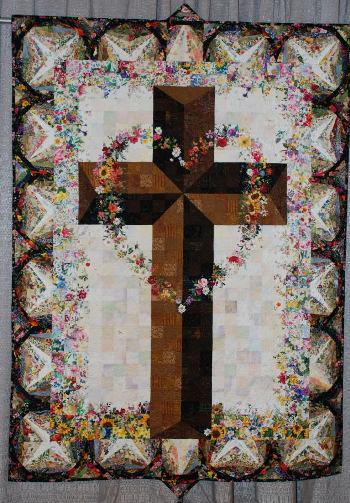 In This Quiet Place #2

I began praying for my friend and her surgeons on the morning of eye surgery. With my box of 2 inch floral squares, I was drawn to my design wall. This design is the result of that day-long prayer for healing. It signifies Jesus' healing touch and his love for each of us. I presented it as an encouragement during my friend's long and frustrating healing process. This quilt is actually a larger reproduction of what I gave to her. The original brings such joy in the continuing healing process, I just couldn’t ask for it back. 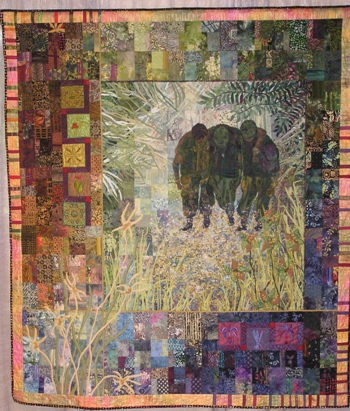 Honoring Those Who Served

The Vietnam War represents a staggering piece of American history. This war saw conflict on the battlefields, in the political arena and in the hearts of Americans across the homeland. 2.7 million Americans served in the war, and 58,000 Americans were killed in action. As a therapist for many years, I have spoken with veterans of this war and shared their painful memories. As the wife of a combat veteran, I have lived with the effects of war. This quilt was made to honor the incredible sacrifices these men and women have made in the services to our country. The quilt seeks to extend a sense of spiritual journey, brotherhood and hope for the healing of those who carry our nation's wounds. 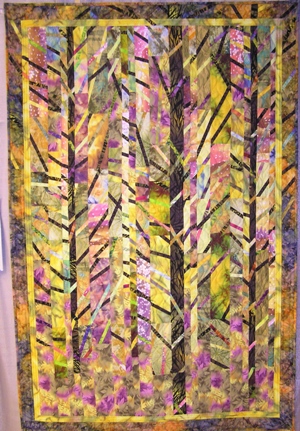 2006 was a year of heartache. I was treated for skin cancer. My husband had a difficult knee replacement surgery and developed symptoms of Parkinson's disease. My father and his longtime companion died within three weeks of each other. The Robert Frost poem, Nothing Gold Can Stay helped me heal from these sorrows. Does this interpretation show the first precious gold buds of spring, or the equally glorious, though dying, golden leaves of autumn? Perhaps it does not matter. Perhaps the message is that each becomes each, in the cycle of life and death, growth and reversal, joy and grief.

Last year I created a challenge to pick a word and interpret it in three different ways with fabric. The word I chose was “Island” and this quilt represents my allegorical interpretation. At some point in our lives, we all have feelings of loneliness and abandonment. If we are lucky those feelings are short-lived and we realize we are part of a greater society. If we are not so lucky we withdraw further and further into our selves and away from those who surround us.

I have watched several family members suffer through clinical depression and it was a very painful thing to see, especially for those of us that loved the one suffering. Although I cannot know exactly what they were experiencing, this quilt is my way to try and express their feelings of helplessness. In “Island 2” the people at the front of the quilt are in the light, bright and happy. The person at the far end is huddled in the fetal position, alone and in the dark, but exposed. He is unable to see that some people are reaching out to him because he is wrapped in a tangled web of his own hurt and sadness. 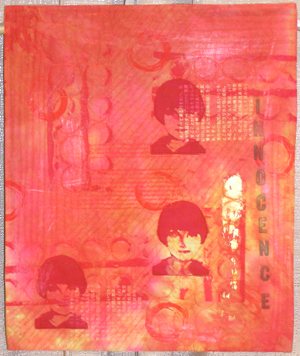 Where Have All the Children Gone? Innocence

The series, “Where have All the Children Gone?”, is a lament for lost childhood.  Children the world over are being killed, tortured, turned in to killers, abused, ignored and forced to grow up before their time.  Old images, my own personal lament and other surface design elements such as discharging and foiling have been included in this piece. 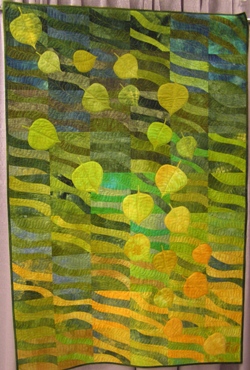 What is the colour associated with loss? I think of basswood leaves in autumn. They seem to grow more luminous as they change from green to gold. In the last few years, I have come to feel that aging is characterized by a series of losses (parents, friends, jobs, health, etc.). The downward flow of leaves on this quilt represents the losses experienced over a lifetime. The golden hue near the bottom represents the hope and joy that can still be experienced even in the midst of loss.

Unity, Self-determination, Collective Work, Responsibility, Cooperative Economics, Creativity, Faith B Seven Principles of Kwanzaa; vital facets of life for all people. Established in 1966, Kwanzaa is celebrated as an ancient and living cultural tradition which reflects the best of African thought and practice in its reaffirmation of the dignity of the human person, the well being of family, community, the integrity of the environment and the rich resources of a people's culture.  (Dr. Maulara Karenga, creator of Kwanzaa) The principles are represented with candles whose colors also have meaning: green: land/hope, red: blood/struggle; black: the people. 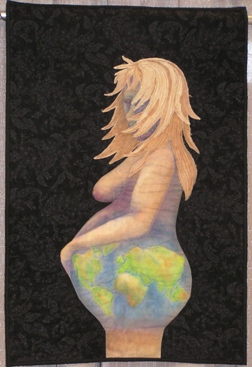 Mother of Us All

Pregnancy is a time filled with hope and anticipation of new life. The pregnant form is one of beauty and reminds us of God's creative actions.  Yet her face, appears sad, bruised, distressed. She carries our world in hope and anticipation as an act of creation, but sadly, our world's inhabitants do not behave the way we have been called to behave.  She reminds us we are all one, if we would only open our heart and recognize our brothers and sisters and the rest of creation, and love as only a mother can love her child. 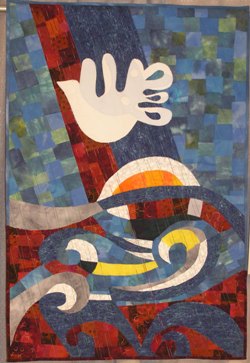 Let the message of peace spread throughout the world, like waves of the ocean to every shore.

This quilt was part of a special exhibit of 21 quilts made by members of the Israeli Quilt Association on the topic of Peace and Brotherhood.