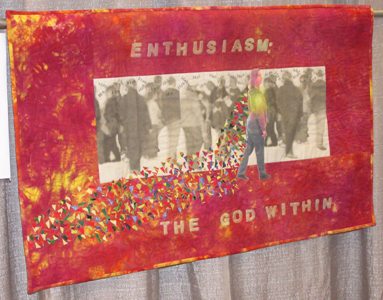 Enthusiasm: The God Within

Enthusiasm is that spark within that sets the artist apart during her moments of creation. Using the tools of creativity, passion, energy and focus, the artist transcends the everyday world and gives visual presence to the God within her. The passion cannot be denied; the artist must create through expression of her true self or be lost in an effort to blend into the mundane. 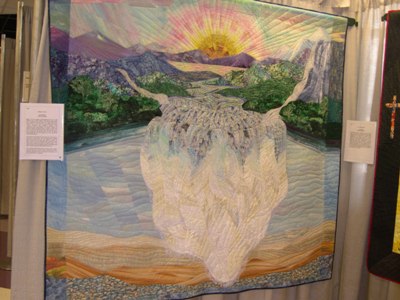 Many of the images surrounding the joy of the Easter rites involve water. This piece uses water as a metaphor for the spirit. In it, water falls from high above in the form of rain, filling the lakes, rivers, streams and hanging valleys, and overflows into the desert our world would be without water, transforming it, filling it with new life. In much the same way, the spirit comes to us from we know not where, fills us with its glory, and overflows into the desert our lives would be without the spirit.

The rising sun shows us the dawn of a new day, a new life, a new spirit. The sun itself was created with shimmering thread and fabrics, some of which were cut from priestly altar garments that were worn during services for twenty years. The beads sewn into the waterfall catch and reflect the light, symbolizing the light within all of us.

The reverse side of the piece shows more water, but this time it is as the ocean meets the shore, with the rainbow of the Covenant to remind us of God’s promise to mankind. 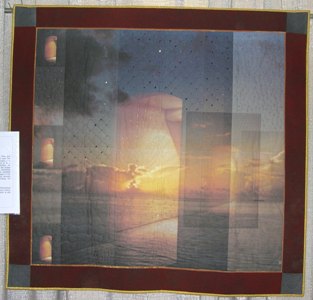 Unitarian Universalists believe in a “free and open search for the truth.” When I saw the photo my husband had taken of a doorway (in a motel in Cottonwood, AZ), it seemed to be a passage that spoke of many possibilities. An ocean sunset photo that suggested the shape of a chalice (the symbol of UU churches) provided an image to represent the spiritual quest. By superimposing several images of the doorway photo on the sunset, I have visually represented my interpretation of finding the way.

The quilt was designed in Adobe Photoshop and inkjet printed on six panels of Kona cotton, hand quilted and beaded. Border fabric is silk noil dyed by Laura Murray. 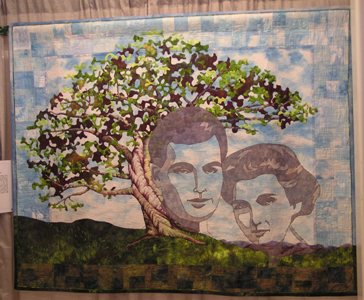 Malachi’s Promise is a deeply personal visual statement of my belief that every human is a literal child of our Heavenly Mother and Father. From the first man and woman down through the ages we are connected just as the roots, branches, leaves and fruit of a tree are interdependent. I dyed the fabric for this quilt and the tree trunk was hand painted. Stamps were carved for the interior lettering. Photographs of ancestors were scanned and digitally manipulated then printed onto fabric to create both the individual faces in the large portraits and the families in the border of the quilt. 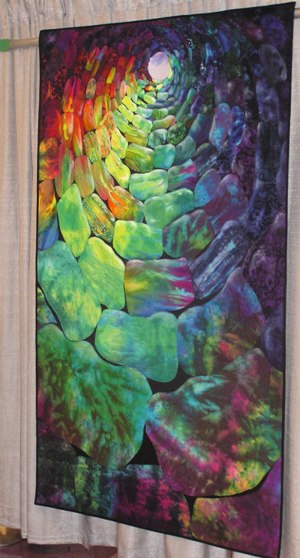 This piece was conceived when my mother was dying. In her lifetime my mother was my spiritual guide, my mentor, my strength. She awakened the power of positive thinking in me and empowered me to use it. She taught me that we are all governed by a force, our own. Her presence in my life is a gentle encouraging force of light and spirit illuminated by the belief in self. In death she is a weightless power who influences and guides me on my path. 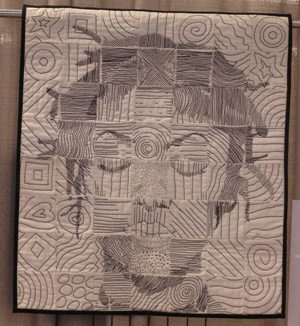 Close your eyes, relax, unwind, and take the time to search your heart and soul. Speak to God. Enter into a spiritual communion. Reward yourself with this inward and spiritual grace. Reap the benefits of prayer.

“Great men are they who see that spiritual is stronger than any material force.”  Emerson 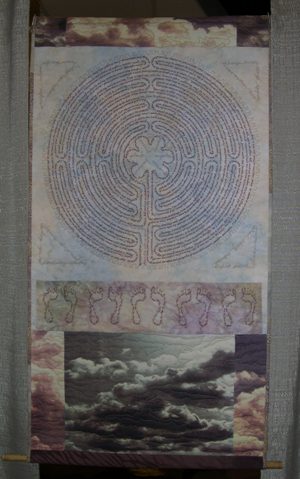 We move through our lives step by step, through a continuous stream of nows, as intentionally as we choose. Spiritual growth happens where we allow it.

The walking meditation possible within a labyrinth allows  me to understand my intentions and approach living them. The geometry soothes me, centers my thoughts, and opens my mind to change.

This labyrinth’s ‘walls’ consist of words that guide me—Thich Nhat Hanh’s rendering of the fire mindfulness trainings in his book, Being Peace.  It could easily be whatever form and whichever feed your soul.

This piece is part of a series based on my photographs of moving water. The series explores the concept of reflection and how to capture the essence of images that are not physically there, images made of light and movement, images that are infinitely variable. It’s also about what is beneath the surface that we see. I find this concept as well as the physical nature of moving water to be an ever changing inspirational subject.

In addition, reflection is what I do throughout my work process. I also hope that viewers will find something to reflect upon as they look at the completed work. 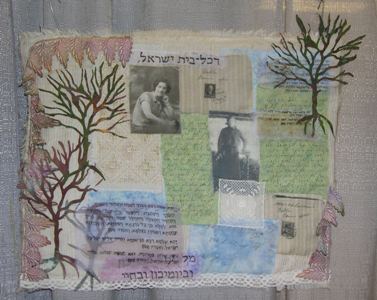 And There Were No Tomorrows

AND THERE WERE NO TOMORROWS is a Expressions of Healing tribute to my father’s family who perished in the Holocaust. My father came to the United States alone as a teenager. I found his photos of his younger sisters and letters (in the Yiddish language) after his death. The Jewish residents of his small town were shot in the forest, symbolized by the trees overlapping the edges. The Hebrew text is a portion of the Kaddish, the prayer for the dead.

Repeated searches have found no survivors of his family—all three generations perished.

The piece has an unfinished quality—interrupted as was their lives. 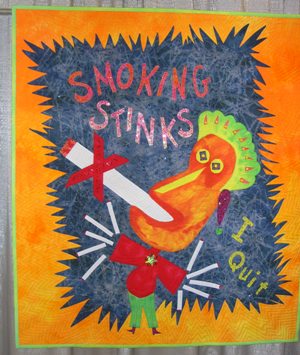 I smoked for 26 years! A pack a day, 20 cigarettes a day. 7300 cigarettes a year. I’ve smoked at least 189,800 cigarettes….. Saying for years now, “I’M GOING TO QUIT SMOKING!” Saying “it’s bad for me.” I’ve cried, I’ve whined, told everyone…even God “I QUIT” But I always smoked another one. And another after that. ONE DAY…I smelled something. That’s ME that STINKS! That stench is too much! I can’t stand it anymore! I’m sick of stinking! I QUIT! 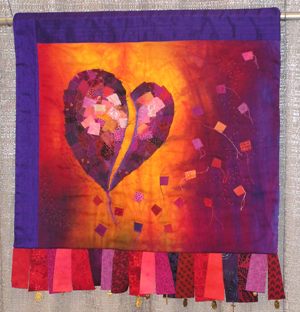 Heart Strings is a very personal piece created following my son’s bypass surgery when he was just 23. Learning that he’d have to endure yet another open heart operation was a tremendous blow. I needed to stitch a quilt expressing my overwhelming feelings. The collage and floating squares with their loose strings illustrate what I felt—that I was literally coming apart at the seams—hanging on by a thread. We held on for dear, dear life and through the Grace of God, Matthew survived. Once again, we have been truly blessed. 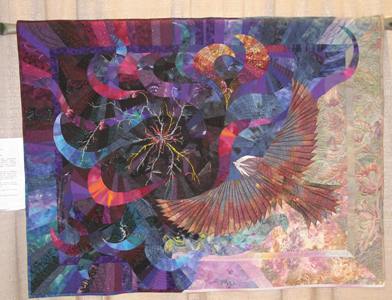 After suffering a broken wrist, appropriate treatment and the usual “Expressions of Healing” time, I continued to experience pain, impacting my ability to quilt. After repeatedly seeking help, a doctor told me, “You don’t have pain, I recommend counseling.”

Eventually, perseverance paid off. A different  doctor diagnosed and removed the cause of my pain. The therapy of working on “The Secret Place”, whose construction was precipitated by this experience, saw me through a difficult time.

The quilt is based on Psalm 91, “He who dwelleth in the secret place of the most high, shall abide under the shelter of his wings.” The Lord, represented by the eagle, heads directly into the storms of life for me. My secret place of refuge is the place of quiet and beauty under His wings. 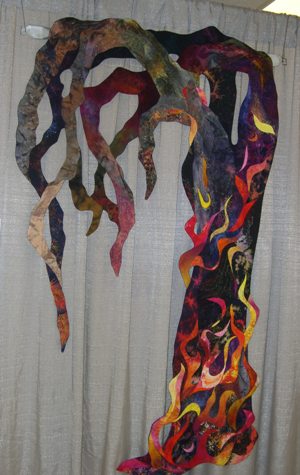 I felt an intense urge to create this work. It wasn’t until after I finished the quilt that I realized it was symbolic of my current emotional state! I was feeling weary, overburdened, and “burned-out”. The hectic schedules and the constant busyness in my life was taking its toll. This quilt provided a sudden insight for me. It is a startling wake-up call to take more time to relax.